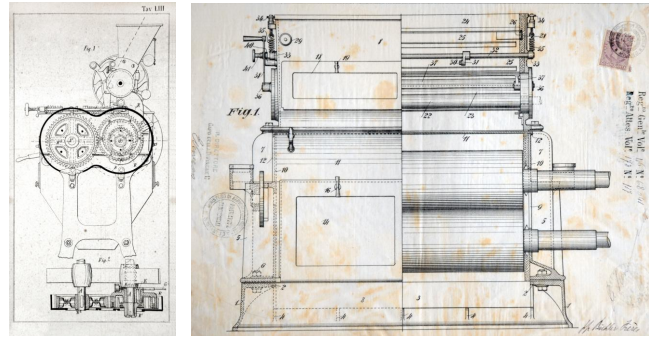 Milling is the fundamental step in the transformation of wheat into flour with the main objective to separate the endosperm of the caryopsis from the peripheral crushing parts, obtaining the best possible yield. The main product of durum wheat milling is semolina, whereas for soft wheat is flour. The machine currently used for this purpose is the roller mill.

But how did we get here? And how did the Leonardo Roller Mill revolutionize a milling system that has been standing still for years? Let’s discover it together.

Grinding, as you may know, has very ancient origins. It draws roots from prehistory where it was carried out with artisanal tools, similar to the current mortar and pestle.

The three stones have a different texture and this allowed to produce different types of products with variuos grain sizes. We find the same principle today,when different rows are applied on the cylinders (rows per centimetre) according to the type of product to be produced.

Like everything else, the milling sector has undergone a series of slow technological changes over the centuries: slowly the manual domestic grinding was abandoned and replaced, in the Early Middle Ages, since the appearance of the stone mill. Also, the figure of the professional miller was introduced. 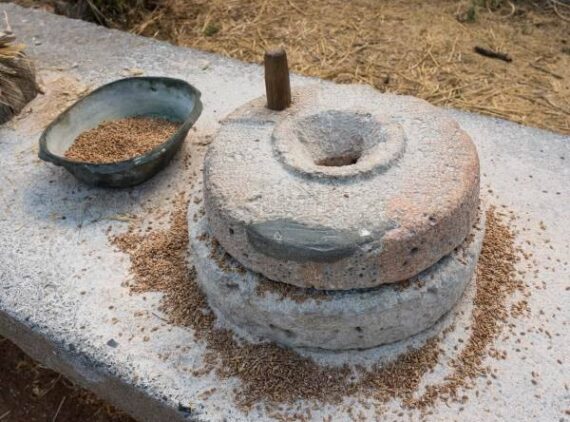 Although the stone mill was already known in ancient times, it is in the Middle Ages that this technology becomes popular in the grinding of cereals. This diffusion is given by the technological improvements that allowed to exploit the energy of the waterways and wind. The picture shows a stone mill powered by water; the crank on the left regulated the flow. 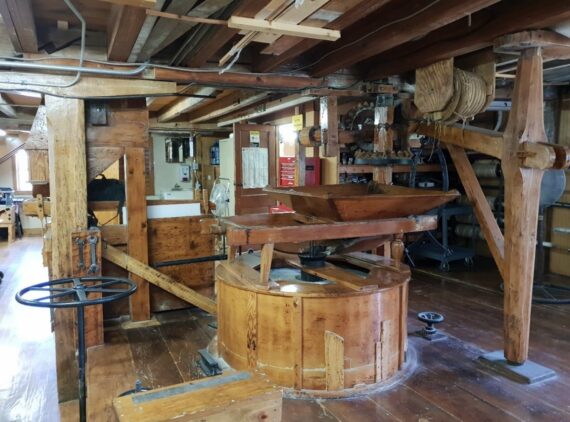 BRIEF NOTES ON THE OPERATION OF A STONE MILL

In the stone mill, we have two millstones overlapped, the lower one remains still while the upper one rotates, for this it is called “active”. The grain size of the final grind is adjustable by varying the distance between the millstones.

The upper millstone is supported by an element which is fixed to a vertical axis that gives the rotation, and is therefore suspended and perfectly balanced above the lower one. The vertical axis that allows rotation also controls (by means of a special lever) the working distance between the two millstones. The millstones are normally protected and enclosed by a roundish element on which is placed a hopper that contains the product to be ground. The product, from the hopper, goes down inside the central hole and then is ground. The special grooves facilitate the grinding and evacuation of the product.

Over time, factors such as the type of material used to make the millstones become increasingly important. Other aspects that are taken into consideration are the shape and number of grooves and the number of turns of the upper stone.

THE ARRIVAL OF THE ROLLING MILL

It will take until the 19th century for the appearance of new technologies. The first roller mill appears to replace the stone mill, allowing the daily production of thousands of quintals of different flour and other products. Also, soon the energy of the water is replaced by the steam engine. The first patents date back to 1823 and initially the rolling mills were formed by two or more cylinders positioned vertically one over the other. 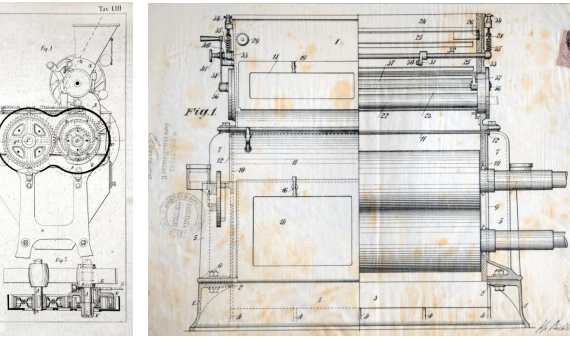 The transition to the new technology took place gradually: the “high milling” (or gradual milling of cylinders) was introduced with subsequent breakages and consequent tumbling and separation of the products.  This method allowed for the production of certain broken flours and a variety of products including gries, dunst (semolina) and other products.

The cylinders were metal rollers (grooved by straight or helical rows), mostly made of cast iron or steel, or coated with porcelain which coupled inside the rolling mills, allowed the milling of the wheat thanks to the rubbing of one cylinder on the other.

Then, in 2015, the Leonardo Roller Mill broke the rules and marked the beginning of a new era.

With Leonardo, Omas gained a place in the history of milling, entering as market innovator in a stationary sector, and bringing important and revolutionary changes to one of the main machineries in a milling plant.

Omas has made the four grinding rollers completely independent from each other, eliminating the backhoes of pulleys and belts that previously allowed the two pairs of cylinders to grind.

The application of electric motors with 20 permanent magnets on the Direct Drive cylinder (instead of 4 induced magnets) controlled by frequency variator (inverter), allows to adjust the speed of each cylinder separately, modifying therefore several parameters. Besides, Leonardo guarantees the possibility of modifying various parameters during grinding, not only the GAP but also other parameters such as:

All these parameters have an impact on the grinding process as important as the regulation of the GAP. Being able to vary all these factors while working give to the mill an extreme flexibility. The operator can adapt the milling to different types of cereals and/or legumes without compromising the milling yield and quality of the finished product.

SAFETY AND HYGIENE AT FIRST PLACE

Another aspect on which Omas invested a lot, was the increase in safety, by completely eliminating referral belts and/or gears.

Thanks to the system designed, today the operator can work with the machine without the side housings, in order to ensure complete safety at the workplace. Leonardo is equipped with a built-in pneumatic socket (Pick-up), so there is no need to mount drive motors, trapezoidal belts or whatever.

In addition, Leonardo can be placed directly on the zero floor, which translates into a huge advantage over the total cost of the building. Finally, the machine can be mounted on 4 independent feet, allowing easy cleaning on the floor, and ensuring very high hygienic standards. 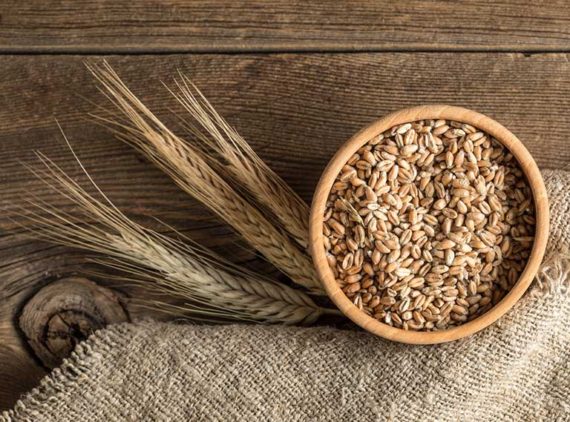 How is a grain of wheat made? Property, structure and molecular composition 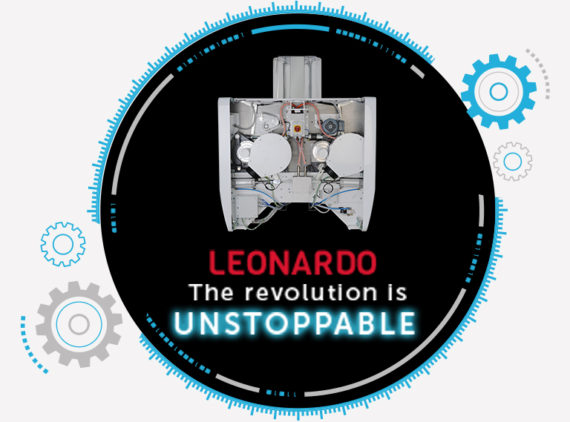 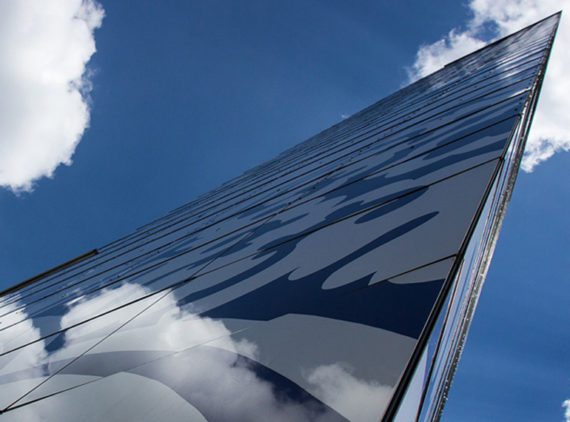